"In Italy, for thirty years under the Borgias they had warfare, terror, murder and bloodshed, but they produced Michelangelo, Leonardo da Vinci and the Renaissance. In Switzerland they had brotherly love, they had five hundred years of democracy and peace -and what did that produce? The cuckoo clock."

Given that we are in a VUCA (short for volatility, uncertainty, complexity, and ambiguity) world, - and that the pace of change is speeding up, not slowing down - we not only have to anticipate the key skills needed for the future, but to set about acquiring them now.

Global media and entertainment has experienced the fastest and most dramatic transformation over the last decade or so and disruption is starting to hit many other sectors, as witnessed by the changing habits of customers, who are engaging with technology as never before.

The future is here

Artificial intelligence is already making huge strides, as is 3D printing, and there is a wealth of fascinating new materials that will transform the very fabric of our surroundings. With personalised medicine and personalised education on the horizon, there has never been a better time to think about the personal qualities, skills and mindsets that will be needed.

As in the past, some jobs will disappear and new ones that we haven't even begun to imagine will take their place. If we manage to outrun the environmental destruction that's currently unfolding, we may yet be heading for a comparative utopia. This could include amazing new materials with hitherto unimaginable properties, which, when used with new technology like 3D printing and enabled by an internet connection, could put the means of production back in the hands of individuals, in a way not seen before the days of the First Industrial Revolution. This would have huge consequences for the way we behave and organise ourselves economically, socially and politically.

Whether that means the decline of the organisation as we know it, or not, a survey done by the World Economic Forum’s Global Agenda Council on the Future of Software & Society has indicated that it expects artificial intelligence machines to be part of a company's board of directors by 2026. Almost impossible to imagine now - yet smart phones, drones and driverless cars were not part of our consciousness either ten years ago.

We have nothing to fear but fear itself

Between now and then, dramatic change, uncertainty, unprecedented pressure on the environment and bad news reported constantly in real time, will mean that the need for self awareness, and especially regulating our own emotions, will have never been greater. Already, we are experiencing unprecedented levels of anxiety and the World Health Organisation has indicated that by 2030 depression will be the leading cause of ill health globally.

So it's little wonder that the World Economic Forum has predicted the changes needed in skills from 2015 by 2020 as follows:

That creativity jumps from number 10 to number 3 comes as no surprise - a tremendous amount of creativity is urgently needed, along with an increased demand for critical thinking – definitely not "business as usual", as indicated by the fact that quality control drops off the list altogether.

Necessity is the mother of invention

By far the most important new entry onto the list is emotional intelligence – a subject with many definitions. To some extent, our ability to be creative can depend on how able we are to regulate our emotions, and harness them to achieve a particular outcome. If necessity is the mother of invention, scarcity is often the father. Creativity can be the result, but only if we are able to use our emotional intelligence to acknowledge our fears, and also understand our relationship to stress – some people are energised and motivated by it, others are simply derailed.

So what is emotional intelligence anyway?

There are many definitions, but in essence it is a combination of behaviour, skill, mindset and emotional awareness that takes reflection and practice. Above all, it's about using our awareness of our needs, thoughts and feelings at a much more conscious level than we are used to, and making conscious choices in how we respond to circumstances that lie beyond our immediate control.

One of the biggest barriers to becoming more emotionally intelligent arises from our tendency to avoid difficult feelings - we don't want to be upset by our feelings of envy, anger or sadness, or any negative feeling that might make us uncomfortable, because this shakes our carefully constructed view of ourselves. It's understandable then, that to face the problems of a VUCA world, we often make concerted efforts to shield ourselves from uncomfortable truths by using various forms of denial.

Here are a few strategies outlined in brief, and paraphrased from The Book of Life, that you can read more about here:

Simply naming the emotion we're experiencing helps to alleviate it. This shows how our rational, observing self can benefit from the messages sent by our feeling, intuitive self. Once the message from the emotion has been processed, reason can once more prevail.

There can be no creativity without first allowing ourselves to be vulnerable – to failure, unpleasant emotions and considerable discomfort. Emotional intelligence is needed to know that this is all part of the process, and that by using the messages contained in our less pleasant emotions to take meaningful, constructive action will more often than not result in innovation.

Our "feeling" selves react much faster than our "rational" selves. We evolved this way to help us flee from danger. Ignoring our feelings, often results in bad decisions – decisions designed to protect the status quo, no matter how flawed.

From climate-change deniers, to business people who fail to address the real issues and hope the storm will pass, there is evidence of the consequences of denial visible everywhere.

As Stephen Johnson said: "A transformed individual is one who can tell the truth.  A transformed environment is one in which the truth can be told."

Tania Hummel is a senior HR professional and executive coach, providing coaching and consultancy services across a range of organisational development and design issues.

Tania led the HR function of Nature and Macmillan, one of the world’s most renowned scientific, academic and education publishers, during a period of transformation from a regionally organised, traditional, print-based business to a global digital and data-driven information provider. 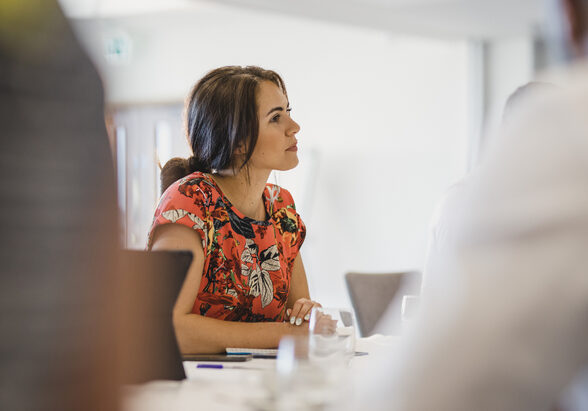